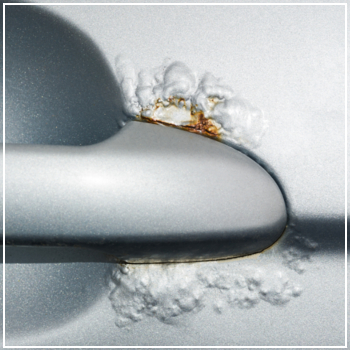 After your vehicle has been repainted, you feel a sense of dread when bubbles or blisters appear on the new coat. Typically, this occurs two to three months after application.

While there’s a good chance corrosion may have started underneath, moisture and debris in the paint job may also be involved. Before you make an appointment, here’s what you should know about rusting, moisture and car paint application.

Why Bubbles Appear In Car Paint

Also known as osmotic blistering, bubbles are the result of moisture entering the paint. During application, droplets get trapped inside or below the paint’s surface.

The moisture then migrates to the surface, where it emerges and releases. The result resembles a bubble or blister that visually mars the paint job. At this point, the most viable solution is to remove the paint and refinish the panel.

Specific conditions can cause bubbling to occur, including:

For moisture to escape from the paint, the humidity in the air needs to decrease and the outdoor temperature needs to increase. If the temperatures are too low, the moisture ends up freezing in the paint, which can lead to adhesion issues. Both scenarios contribute to blistering or bubbles, which appear when the conditions are just right.

Corrosion also causes paint to start bubbling and experience adhesion issues. Moisture is a culprit here but as an equal factor, the metal below the paint needs to be exposed. This area can be as small as a chip from a rock or as large as a dent from a fender-bender.

In both cases, the metal underneath creates a pathway for moisture, which will go after the steel and create a chemical reaction. A bubbling texture in the paint, especially when it’s concentrated in one area, often indicates the development of rust.

As one differentiating factor, moisture trapped in the paint may cause blistering or bubbles over your vehicle’s full surface.

When Is It Not Rust?

The rate of application can also create a bubbling effect. Unlike rust or moisture, this occurrence resembles pinholes or craters. Adding too much too soon or standing too close during application ends up trapping solvents or creating air pockets. Solvents will eventually emerge from the outer layer. Meanwhile, air bubbles burst and leave a crater-like texture.

In this instance, bubbling won’t be as severe. The paint may simply need to be sanded down to remove the imperfection.

De-lamination may be another cause. Due to repeat sun exposure, the clear coat and paint below eventually begin to break down. The paint starts to peel and bubble, before flaking off.

Whether you applied the paint or hired a professional, bubbling may be masking corrosion. To schedule an appointment for repainting and rustproofing, contact DaSilva’s Auto Body today.