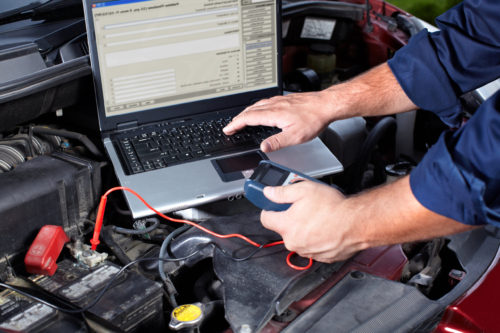 Have you thought about how hard your car’s battery works? It powers many of the car’s most essential operational components and a fully charged battery starts and keeps the engine running. In optimal conditions, car batteries last four to six years. Outside factors, including weather and your driving habits, may reduce the amount of power it provides, which affects how well your vehicle operates.

What a Car Battery Does

Particularly where the alternator and battery are concerned, if one component gives out, the battery won’t hold a charge or be able to power other components. If the battery is not routinely checked, you could one day find yourself stranded on the side of the road.

In response, be on the lookout for:

As a rule of thumb, have your battery checked out every time you have an oil change. Especially during the winter months, your car’s battery has a greater chance of dying. During these appointments, a service technician may:

If your car has issues starting, take it into DaSilva’s for a diagnostic assessment and possible repairs. To make an appointment, contact our Naugatuck shop today.