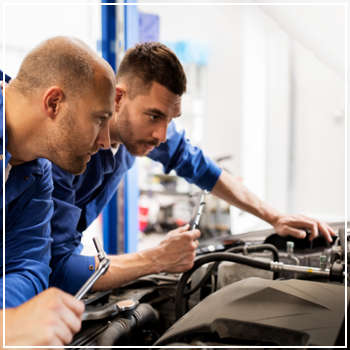 When your car suddenly loses power, you take it to see a technician, who tells you the alternator is having issues. Alternators are a crucial vehicle component, so what does this mean for your car’s performance?

What the Alternator Does

A small and lightweight part, no larger than a coconut and made with aluminum housing, an alternator is usually located toward the front of the engine and is driven by the crankshaft. It’s a key part of your car’s charging system, which is also composed of the battery and the voltage regulator.

Within this system, the alternator works in conjunction with the battery to create power for your car’s electrical parts – the lights and the instrument panel on your dashboard.

Through electromagnetism, the alternator generates AC power, which is run to the battery. From there, the battery delivers the right amount of voltage needed. How is that power created? The alternator itself houses multiple smaller parts, including the rotor and a pulley drive, and the crankshaft works to power the alternator. Through this setup, once the engine turns on, the crankshaft turns the drive belt, which rotates the pulley on the rotor shaft. Vents on the front and back let heat escape.

Over time, these parts wear out – a typical alternator lasts anywhere from 100,000 to 150,000 miles – or roughly seven years. Depending on certain factors, your alternator may wear out before then.

You will notice there’s an issue when you turn on the car and, instead of hearing the engine roar, you notice a clicking sound or it seems like the battery is dead. These may be attributed to:

Beyond the clicking sound, your car could be having alternator issues if you notice any of these signs.

Do the lights seem darker than usual or flicker, even on your dashboard? If your car travels faster and the lights get brighter, the issue could be a faulty alternator. It’s especially pronounced when one of your car’s other parts turns on – for instance, the engine cooling fan – and the lights suddenly seem dim or yellow in color.

Your car could be having alternator issues when you notice the check engine light, the battery icon or the ALT indicator come on. At this point, have your car inspected.

Unfamiliar sounds don’t always indicate a specific alternator problem, but they might if you hear:

Along with these factors, a burning rubber smell and electrical issues may point to a slipped or worn out alternator pulley.

Beyond the lights, the electrical system may signal something is wrong with your alternator. Look for:

Aside from the devices themselves, a malfunctioning alternator and a dead battery often go together. Your car battery is not meant to be a long-term power source and the extra demand will drain even the newest cells. As such, if you just charged or installed a battery and it dies suddenly, the problem might go back to a failing alternator.

Have you been dealing with a combination of these issues? If so, bring your car into DaSilva’s Auto Body and one of our technicians will run a diagnostic test. To schedule an appointment or learn more about our services, give our Naugatuck location a call today.