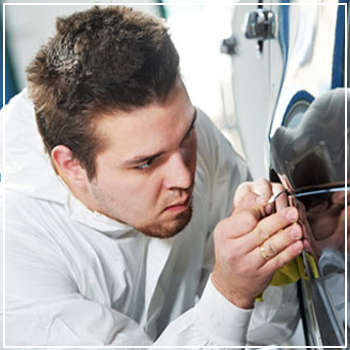 Auto enthusiasts and DIYers may use a kit from the auto parts store to paint their own cars but after a while, rust, bubbles or buckling appears on the surface. Unfortunately, painting over the area again does not help the issue.

A professional paint job, ideally in a closed and controlled spray booth, can save you this headache in more ways than one. What can result from a bad paint job or putting off a repaint for several years?

Visually, bleeding occurs when the original finish comes through the new topcoat and looks mottled or multicolored. This issue typically results from insufficient preparation or using a lighter color paint. For more consistent results, sand the old coat and add a primer before applying the new topcoat.

Die Back or Dulling

At some point, your car’s glossy finish may give way to a matte look. The longer you go without reapplying the topcoat, the more likely dulling will occur. This can happen in a relatively short period if the solvent doesn’t evaporate fully or the first coat isn’t cured properly.

Closed spray booths help block out dirt and debris. When applying topcoat in the driveway, it’s rare to keep these particles away. Especially with DIY work, these small particles can end up under or on top of the final coat, leading to a bumpy, gritty appearance.

When paint bubbles pop in one area, the result is “fish eyes” or trapped air. This problem often stems from poor preparation, including:

Like the surface of an orange peel, your paint develops several pits. These are usually created when the paint dries before it can flow over your car’s surface. This may be the result of:

Often due to heavy application, paint starts to run down the side of the car. Once dry, it looks uneven and thick in some areas but not others. This usually occurs when you:

Do you park your car directly in the sun? When you don’t have a garage or carport, regular UV exposure can fade the paint’s finish, especially if you don’t routinely wash and wax the surface.

Also called “lifting”, the paint starts to shrivel and bunch up while you’re adding a new coat. In this case, the new coat’s solvents repel those in the old coat, causing the paint to lift up. This often occurs when you’re reapplying urethane or enamel and don’t allow the base coat to fully dry.

On the other hand, the solvent can pass from the top to the undercoats, resulting in wrinkling around the newly applied paint. This issue generally stems from poor-quality primers and sealers creating a thin or insufficient barrier.

Typically, paint begins to crack when one of the coats applied is too thick or you’ve applied too much hardener. If you attempted to paint over an existing crack, it could emerge through the new paint.

Similar to house painting, auto paint that’s not given enough time to dry doesn’t adhere correctly. At some point, the layers start to separate and begin peeling off the car.

Especially with metallic finishes, your car’s paint takes on a streaked appearance with time, due to improper application techniques:

To correct a rough, faded or uneven auto paint job, schedule an appointment with the team at DaSilva’s Auto Body today!