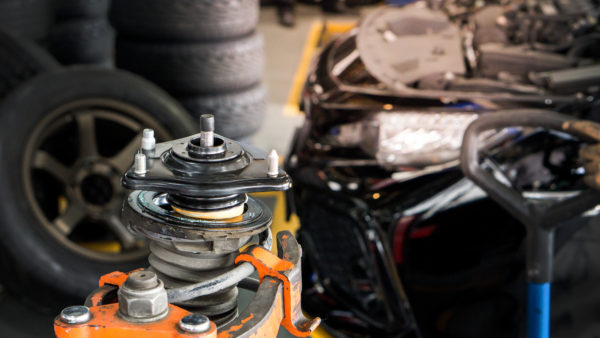 Shocks help balance your car for a more pleasant ride. Without them, the vehicle will bounce up and down. When you’re told the shocks are damaged, it’s important to have them replaced sooner rather than later. Here’s what you should know.

What Shocks and Struts Do

Shocks and struts are part of your vehicle’s suspension system. They absorb the impact your car experiences, especially when it goes over bumps and potholes. Shocks and struts make your trip fairly smooth but without them, you feel every bump in the road and the car may rock or wobble.

While both terms are used interchangeably, a strut is simply the shock absorber unit with the corner spring. Attached to the body or frame and the control arms, the shock absorber is a piston holding hydraulic fluid, which flows through the car’s restrictive valves and channels, creating resistance against the spring’s natural movement.

Compared to the spring, the shock absorber moves at a significantly slower pace. This feeling gets transferred through the rest of the vehicle’s frame and helps create a more stable center of gravity, which helps the tires stay on the pavement and gives the driver better control the car.

Traditionally, cars have four struts – one on each wheel, or two in the front and two in the rear. Compared to the rest of your car’s parts, they need significantly less maintenance – but that doesn’t mean they don’t experience damage.

Typically, these parts last from four to 10 years, depending on the degree of wear and tear. Many car manufacturers recommend replacing the struts and shock absorbers every 40,000 to 50,000 miles. However, under normal driving conditions with a more modern vehicle, these parts may last longer.

Generally, it’s time to replace a shock absorber when:

Before your car needs a replacement, several factors can damage or place a great degree of wear on your car’s struts:

In all these scenarios, worn-out, leaking valves don’t create the resistance the car needs, causing you to feel everything as you drive. You could more easily lose control and place a greater degree of wear on the rest of your car.

If you notice any combination of the signs outlined above:

Concerned about your car’s shock absorbers and struts? Whether your car’s suspension system needs maintenance or new parts, make an appointment with our Naugatuck shop.

Schedule an Appointment
Your automobile is our focus, customer satisfaction is our mission.
© Copyright 2022 DaSilva's Auto Body | All Rights Reserved | Servicing CT | Privacy Policy
Digital Marketing by Imagine It Consulting