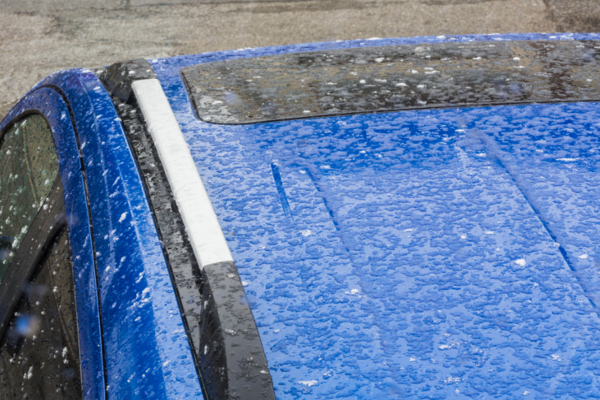 Hail is a type of solid precipitation, consisting of different sized ice lumps called hailstones. Hail, which forms inside thunderstorm updrafts, is known to cause significant damage – especially to an exposed vehicle. The Highway Loss Data Institute (HLDI) examined hail claims received by 31 auto insurance companies from 2008 to 2014, finding the total cost of damage to be $5.37 billion!

Although Connecticut experiences less hailstorms than other parts of the country, they can leave cars with dozens of dents in the aftermath. DIY methods to fix the damage often cause more long-term harm than good, so it’s crucial to get the professionals involved. The highly trained technicians at DaSilva’s Auto Body can restore your car to pre-hail condition!

How We Repair Hail Damage

When a vehicle is unprotected from hail, several issues may arise – the most noticeable being the car’s exterior appearance. Hailstones can cause varying degrees of damage, depending on their size, hardness and the pattern which they fall.

While hailstones are typically pea-sized, the largest hailstone recorded by the National Severe Storms Laboratory was 8 inches in diameter! To repair the dents made by hailstones, our technicians may suggest one of the following methods.

Hailstones can create irreparable pits in your car’s metal surfaces, resulting in the need for body panel replacement. A trained technician will remove the old panels, install new ones and paint them to match your car’s existing color.

For more minor dents, we will remove some of the paint from the affected area, sand it down and fill the dent with glaze putty. For medium-sized dents, the technician may completely remove the paint, fill the dents with body filler, sand and repaint the surface.

The modern solution for hail damage is paintless dent repair (PDR). It’s most effective on small dings but can work on any dents where the paint and metal remain intact.

Pressure is applied to the back side of the body panel to reshape the dent, without compromising the existing paint job. As exterior repainting is not necessary, PDR is faster than most traditional repair methods and typically costs less too.

Hailstones can also chip or crack your windshield. If the glass is damaged beyond repair, the windshield will be completely replaced. For smaller cracks, the affected area can be filled with a curable resin that visually matches the existing glass.

Protecting Your Car From Hail

To protect against future damage, keep the following tips in mind.

If your vehicle was damaged during a recent hailstorm, trust the professionals at DaSilva’s Auto Body to perform the necessary repairs. To request service, contact us today.