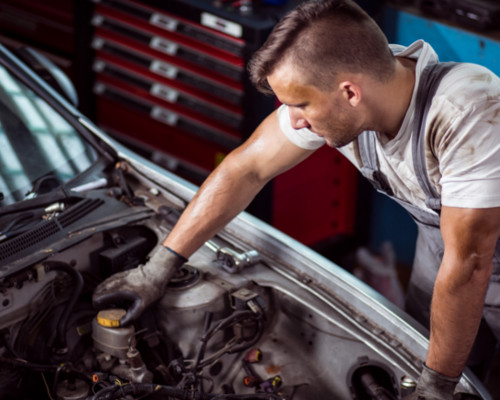 Within the brake system, fluid plays a key role. It creates hydraulic pressure, which allows the pistons to operate and converts the pressure you apply into energy. This energy generates enough force to squeeze all four brake rotors and ensures your car responds when you press down on the pedals.

Brake fluid operates in a high-pressure, high-temperature environment – 100 to 200° F on a typical drive and as high as 550° F when you travel downhill. To handle these conditions, brake fluid has a high boiling point but this solution also attracts moisture from your surroundings. The introduction of water lowers the fluid’s boiling point and in turn, brake components start to corrode and brake failure could result.

Before your brake system enters this perilous state, make sure you change your car’s fluid. What should you know?

Signs It’s Time for a Change or Flush

Your car might be trying to tell you the brake system needs new fluid if:

Unlike with your car’s other fluids, brake fluid doesn’t get dirty or evaporate. When moisture lowers its boiling temperature, its effectiveness does begin to decline. Contaminating your car’s fluid is only the beginning:

When to Change Your Brake Fluid

As a general guideline, make an effort to get your brake fluid topped off by a professional every two years. Much like the rest of your car’s fluids, manufacturers have different guidelines for their models, varying from as little as 20,000 miles for a Mercedes-Benz to 45,000 for a Chevrolet. Others recommend every three years, regardless of mileage, and some brands don’t include a timetable in the owner’s manual.

In any case, it’s a good idea to have someone inspect the fluid for its water content at least every two years. Never let more than five years go by between changes. If you live in a region with high-humidity weather or snowy winters, you might need to schedule more frequent changes. In these cases, your brake fluid has a greater chance of getting contaminated with moisture, salt or other fine particles.

Do you know which type of fluid your car needs for the next change or flush? Most personal vehicles take a DOT 3 or DOT 4 fluid but in certain cases, DOT 5 may be needed.

What’s the difference? The number indicates the fluid’s viscosity and boiling point. While DOT 3 and 4 are glycol-based solutions, DOT 5 is silicone based. Considered an upgrade over the previous two, DOT 5 won’t eat away at your car’s paint or absorb water. This last point creates a new set of issues: Instead of getting absorbed by the fluid, water may pool in your brake system directly and result in corrosion.

Have you gotten to that two-year mark? Have DaSilva’s experienced team examine and change your car’s brake fluid. To learn more, contact our Naugatuck shop!

Schedule an Appointment
Your automobile is our focus, customer satisfaction is our mission.
© Copyright 2021 DaSilva's Auto Body | All Rights Reserved | Servicing CT | Privacy Policy
Digital Marketing by Imagine It Consulting