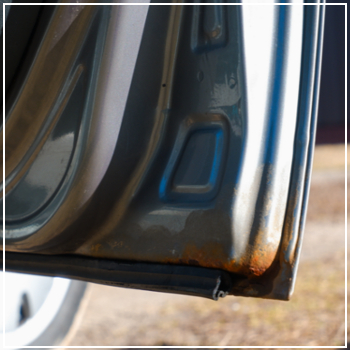 Vehicle rust that’s left unchecked has potential to cause structural damage, weakening the frame and impact protection in an accident.

Rust often forms as a result of a chemical reaction involving exposed metal, moisture and salt. Older vehicles made with materials other than galvanized steel or aluminum are more prone to rusting due to their composition. Warm oceanside locations and regions that see a lot of snow can also exacerbate vehicle rusting.

Where Does Rust Start?

Particularly from driving on salted roads, rust tends to form on the bottom of a vehicle first but the corrosion process can start anywhere. You’re advised to perform a thorough inspection and bring the vehicle to a professional to have exposed rust patches, bubbling and flaking paint treated.

These signs can indicate rust is going after the metal below the surface. Make sure to check the following areas.

The frame rails go along the sides of a vehicle, right below the door. Rust can form here because the frame rails are close to the ground and exposed to the elements, and cars tend to use thinner, lower-gauge steel in this area. Ignoring rust here can mean it easily spreads throughout your vehicle and results in costlier repairs down the line.

Right above your tires, the wheel wells are highly exposed to corrosive rock salt during winter and collect moisture and debris throughout the year. Wheel wells tend to use a thinner metal that will be more affected by rust. Do a visual inspection first before you feel along the interior with your hand.

In general, the bottom of the car is more prone to rusting due to location and exposure to the elements and rock salt. The exhaust system, particularly the tailpipe, is especially vulnerable to both interior and exterior moisture and the accumulation of mud and debris.

Additionally, the materials making up the exhaust system play a role: Stainless and cold-rolled steel are more at risk for rusting. In addition to checking the tailpipe, inspect areas where the system bends or meets a joint, including the muffler and catalytic converter. A rusting exhaust system can alter your car’s ability to manage emissions and may divert carbon monoxide into the cabin.

Rocker and the lower-rear quarter panels sit close to the base of the car. This location is not only prime for exposure to the elements but also to road debris, moisture and rock salt. Paint chips are more likely to occur in this area, which can expose the metal underneath and invite rust to form.

We rarely look under the carpeting in our vehicles, but rust can potentially start or fester here. Remove the mats and check around insulation within the cabin of the car. Also check the trunk, removing the carpet to check around the spare tire.

Rust can start on doors due to chipped paint or debris and moisture accumulating within the drain holes or it may spread from the panels or suspension system. Check inside and outside of the doors for patches of rust and have the drain holes cleaned.

Generally, engine parts experience surface rust that rarely progresses to alter their functionality. Yet, especially if you’re purchasing an older vehicle with fewer plastic components, you’re advised to check under the hood for the exhaust manifold, alternator and the strut tower.

Newer vehicles use plastic for the inner fender, which limits the spread of rust. However, rust can still form on the outer fender, which consists of two welded or bolted pieces of sheet metal. With older cars, both parts remain vulnerable. While you’re less likely to spot rust here, this area can hold onto debris and moisture.

The suspension system consists of multiple metal parts supporting the car. Rust is more than a cosmetic issue here and can quickly become structural once it starts to spread. Be sure to go over the shocks and structs, control arms, ladder frame and any parts bolted together.

Are you concerned about rusting? The technicians at DaSilva’s Auto Body can inspect and rustproof your vehicle before corrosion spreads! To learn more, contact our Naugatuck shop today.