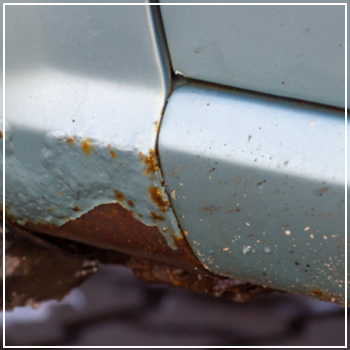 While vehicle rust can be an inevitable occurrence in regions with harsh winters, corrosion occurs in varying degrees. If you’re lucky, it only affects the surface and can be sanded off but in other cases, rust goes after the undercarriage. Eventually, rust may affect the exhaust system and reduce the strength of its side panels.

There are three basic types of automotive rust, including:

To address formation, here’s what you should know.

With surface rust, an auto body technician often sands off the rust and surrounding paint, before applying new primer, paint and coating. However, if you notice a hole in a panel or part, the repairs can become more costly.

Beyond sanding and painting the surface, the part or section will need to be replaced with one that has not been affected by corrosion. Yet at this stage, rust has only affected one area of the vehicle and it can be repaired, although costs vary between a single part and a whole body panel.

When Rust Attacks the Frame

A car with a rusted frame poses a significant safety hazard to anyone inside. Vehicles are designed to provide a degree of protection to its passengers when an accident occurs and a rust-weakened frame lessens the barrier it creates. An impact that may have once dented a side panel will now cause significant structural damage and the force will likely pass through the body inside, resulting in injuries.

Along with decreased protection, rust that continues to spread through the frame can eventually progress to the brakes, suspension system and fuel lines. A badly rusted car may leak gas, prevent you from stopping and may become misaligned, even when you haven’t been in an accident.

Especially if you perform minor car repairs, you may think that surface rust is something you can handle, especially if you have the right painting supplies at home. While this may be the case, what sometimes appears as surface rust may extend further below and likely will require greater repairs by a professional.

In these cases, you sand away part of the paint, only to find that more of the body displays rust. Oftentimes, it progresses from the door panels down to the wheel area and undercarriage. Some car models – particularly convertibles, when the top is kept down in all conditions – are more prone to this pattern than others, especially if water and dead leaves are allowed to gather around drainage holes.

Ignoring this issue allows surface rust to spread and scale rust to eventually penetrate the frame. Trading the car in likely won’t have the impact you want if you’re attempting to upgrade.

Vehicles with visible, if not structurally altering rust end up fetching far lower than a vehicle without this issue. In turn, if the rust only appears to affect the surface or a single part, a professional can determine the extent of the damage and what needs to be replaced.

As the next step, reach out to DaSilva’s Auto Body for rust removal and rustproofing your car. To learn more or schedule an appointment, contact us today.