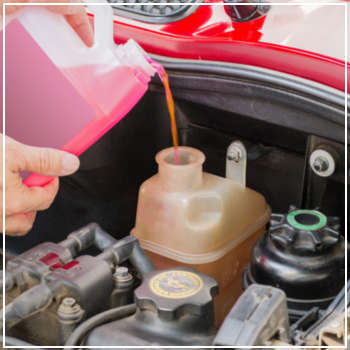 When a car’s coolant has an issue, it greatly impacts the engine. By design, the coolant reservoir sits right in the engine bay. Via the water pump, the engine expels and absorbs the liquid. At the same time, the coolant carries the engine’s heat to the radiator, where it dissipates. When the engine cools, it typically requires more coolant and when it heats up, it needs less.

From low coolant levels to clogged or blocked flow to a defective part, such as a broken drive belt, issues can arise. Unless you regularly check your coolant, you often notice the problem when:

At this point, it’s advised to pull over and stop driving the vehicle. Otherwise, the engine will continue to overheat, resulting in even more damage. Before this happens, the following signs indicate an issue with your car’s coolant system.

Are you regularly having to add fluid to the reservoir, more than usual? Small cracks and leaks – often not noticeable to the naked eye – cause the fluid to drip out or evaporate. In any case, your system is going through coolant far quicker than it should be.

What initially begins as microscopic fissures eventually turns into a visible crack, causing coolant to drip out, create steam or puddle on the ground. You might even smell the coolant as you’re driving. This instance happens with greater frequency when the system is old, your engine regularly overheats or you allow older coolant to flow through and corrode the system’s parts.

However, understand that the leak might not always be coming from the reservoir. Rather, the radiator or connecting hoses could be the culprit or the liquid may be escaping through the water pump or heater hoses.

When the reservoir won’t hold the coolant, you haven’t changed the fluid in ages or the system isn’t properly pressurized, the engine inevitably overheats. Yet, steam pouring out from under the hood may be related to an indirect issue:

4. The Engine Is Consuming the Coolant

An engine with a bad gasket or broken block may start mixing its fluids or leaking coolant into places it shouldn’t often. Often, coolant drips into the cylinder and gets expelled through the exhaust system.

How do you know this is happening? Auto experts recommend restarting your car, from 15 minutes to three hours after. During this time, the coolant is being forced into the cylinders, where it then causes a “miss,” until it’s forced out through the exhaust system. At this point, you might notice steam coming out of the tailpipe.

If you suspect leaking or another issue with your coolant system, have DaSilva’s Auto Body diagnose and repair it. To learn more, give us a call today.