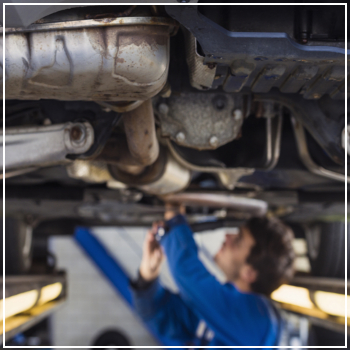 When we notice rust on our cars, we often perceive it as a cosmetic concern. Yet if the issue is left unaddressed, rust can become a structural issue for your vehicle. One area prone to rust that many fail to consider is the exhaust system.

Running underneath the car and key for processing and directing emissions, the exhaust system can rust when exposed to corrosive rock salt in winter. Rusting parts compromise the exhaust system’s operation, including how compounds are filtered and where they are directed. Here’s what you should know.

How the Exhaust System Can Rust

Several factors can cause your exhaust system to rust, including:

Why These Factors are Dangerous

The exhaust system plays a role in emissions, acting as a pathway to direct gases created during the engine’s combustion process to the back of the vehicle, where they are released through the exhaust pipe.

If your exhaust system is operating up to par, the carbon monoxide created migrates with other byproducts to the catalytic converter. The catalytic converter ultimately acts like a filter to extract dangerous emissions and transform the substance into non-toxic carbon dioxide. As the CO2 continues its journey through the exhaust system, it will be released through the tailpipe outside.

Rusting can disrupt this process. For one, the system releases carbon monoxide into the air. This substance can be diverted into the cabin area, where you and all passengers are exposed to a toxic yet odorless gas that’s difficult to detect without a dedicated monitor.

How serious can this be? The Occupational Safety and Health Administration defines “dangerous” carbon monoxide exposure as 100 parts per million (ppm). If rust causes the catalytic converter to malfunction, your exhaust system may be generating amounts of 30,000 to 100,000 ppm, which escape into the atmosphere through the tailpipe or pass into the vehicle’s cabin area.

While rusting is behind this occurrence, leaks in the exhaust system cause unfiltered emissions to migrate into your vehicle’s cabin. The muffler – a passing point from the engine to the vehicle’s rear – can also experience corrosion. When this happens, there’s a greater possibility gases will rise into the vehicle’s interior.

As you can’t smell or taste carbon monoxide, how can you tell rust has targeted your exhaust system? Look for the following signs:

Concerned about exhaust system rusting? Bring your to DaSilva’s Auto Body for an assessment and repairs. To make an appointment, contact our Naugatuck shop today.